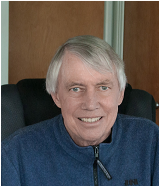 Bruce Laidlaw is a municipal law attorney, freelance writer and photographer. He received his law and undergraduate degrees at the University of Michigan where he was on the wrestling team. He also attended the Aix-Marseille Université in Aix-en-Provence, France. Laidlaw was the recipient of a National Endowment for the Humanities fellowship for community leaders to study at Dartmouth College. He studied Spanish in Cuernavaca, Mexico and San Jose, Costa Rica. He has been the attorney for the City of Ann Arbor, numerous townships and public libraries and one village.

Laidlaw resides, with his wife and two cats, in Ann Arbor, Michigan and near the Village of Eastport in northern Michigan. He has competed in running and cross-country ski marathons and in nordic biathlons. He also dabbles at sailing, windsurfing, rollerblading, kayaking, SUP boarding, badminton and geocaching.

"My wife's father had painful memories of the war and talked of his experiences very little. When he died, a drawer full of things he brought back from the war was found. A box labeled "Captured German photographs" and several German cameras were given to me. They had been confiscated from German prisoners of war.

There was writing in German on the backs of many of the photographs. On some there was writing that was an attempt to translate to English. Although the translations were not always accurate, they did help identify many of the scenes depicted. I circulated copies of the photographs among several people who had much knowledge of military history. With the translations and consultations, I was able to determine that photos covered a period from the war's start with the invasion of Poland through to the disastrous invasion of Russia.

In scrapbooks from my father-in-law's estate, I found photographs he had taken when he was a tank commander during the liberation of France. I also found letters he sent home during the war and letters of commendation. I began researching the history of the war and realized how little I had learned in all of my history courses. In the summer of 2013, I visited with Chet Kennedy. He had been a close friend of my father-in-law and was a fellow tank commander. He provided helpful details regarding their war activity.

Using all the information and images I had collected, I put together an illustrated history and decided to publish it as an ebook."